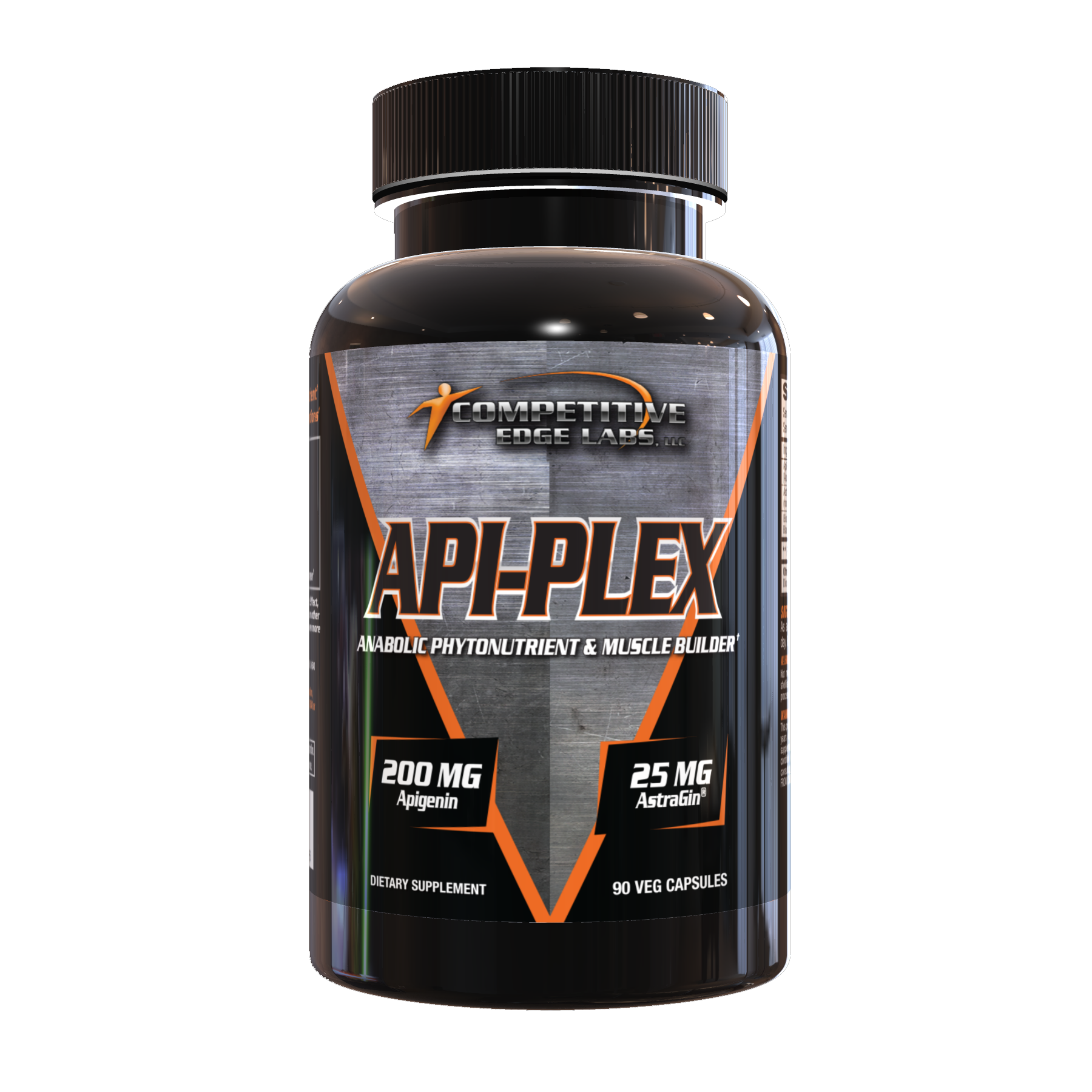 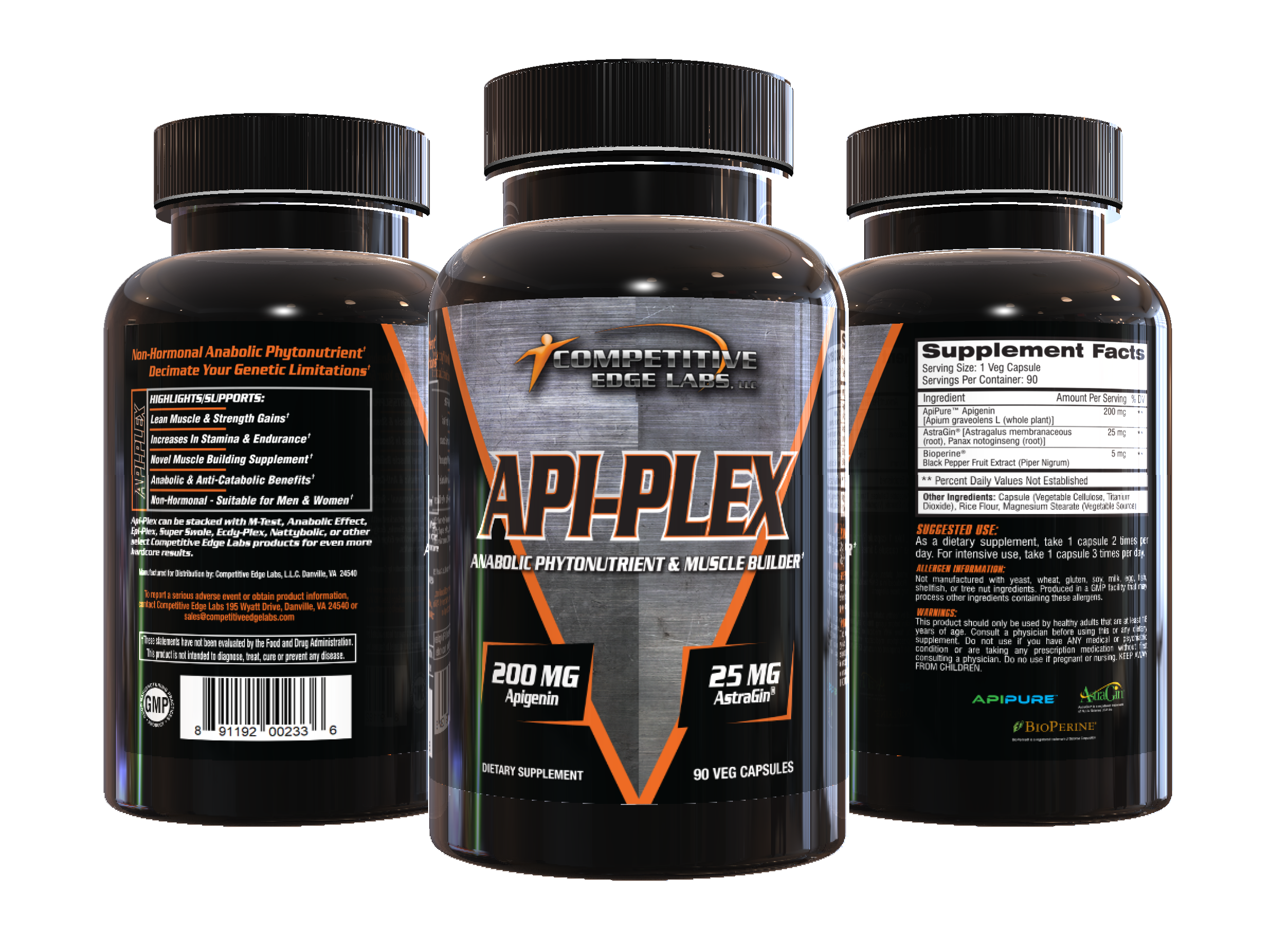 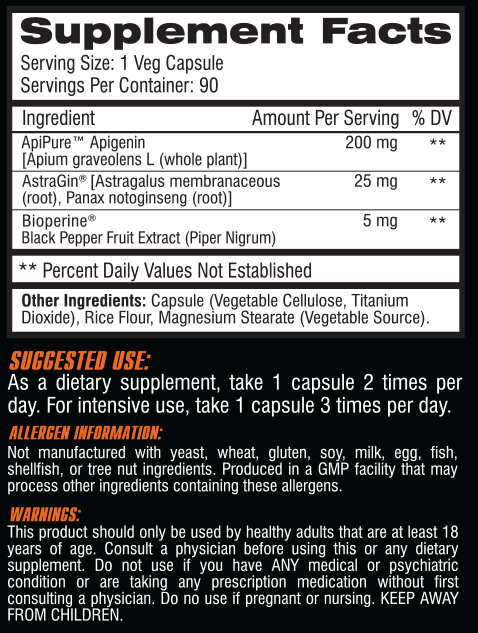 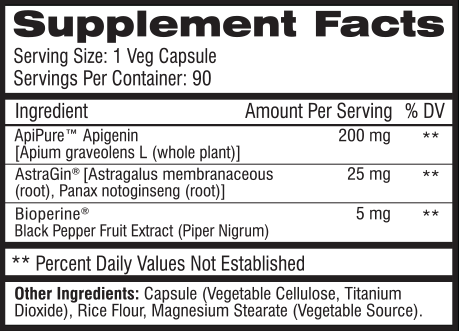 Ask Yourself a Few Questions:

^^^ If so, Apigenin may be a supplement of interest to you.

The quest for muscle and performance gains has led researchers for years to look for natural compounds that can enhance muscle protein synthesis, boost muscle growth, enhance recovery, and improve performance. Over the years, scientists have come across a number of exciting natural anabolic compounds, but rarely one that has such a broad range of potential benefits as Apigenin.

For Those That Want to….

Maximize Every Possible Bit of Their Natural Muscle Growth Potential

Apigenin is a natural flavonoid found in parsley, celery, chamomile, and citrus fruits that is similar to Quercetin, Hesperidin, Luteolin, and Kaempferol. However, even though its structure is very similar to these compounds, Apigenin has some very different effects in the body than those related substances.

Apigenin has a natural anabolic effect, as first discovered by researchers at the Korea Food Research Institute.

In the initial study that led to Apigenin’s popularity for building muscle, scientists began experimenting with his flavone with mice and the mice receiving the Apigenin had significant muscle mass gains over the mice not receiving it. The greater the dosage of Apigenin the mice took, the larger the quad increase!

Apigenin, even before the research showing its natural anabolic benefits, was already regarded as a very exciting compound due to its wide variety of overall benefits including its anti-inflammatory benefits as well as its potential prostate, neuroprotective, and cardioprotective properties. However, of particular interest to many researchers is Apigenin’s potential anti-cancer benefits, which have made Apigenin the subject of many studies around the world.

Another very exciting aspect of Apigenin is its ability to enhance autophagy. Autophagy is a natural cellular mechanism by which by which the cells in our body degrade unnecessary or damaged components within the cell. The process of autophagy helps maintain normal functioning (homeostasis) in the cell. (If you’re familiar with what defragging a computer means, think of that as a good comedic analogy to this process by the cells).

Apigenin has also been studied for a wide variety of other potential benefits including its anti-inflammatory, antioxidant, anti-aromatase, cardiovascular, and antibacterial properties, and more.

Scientists at the Korea Food Research Institute began experimenting with Apigenin in mice and found that the mice receiving Apigenin had significant muscle mass gains of the mice not receiving it.

There were a number of mechanisms of action noted in the studies, including:

Some things mentioned in researcher’s conclusions were:

We found during our own research on this that the links may change depending on the one provided to this study, but can be found by doing a google search with the terms ‘Korea Food Research’ and ‘Apigenin’.

As mentioned above, Apigenin was shown in studies to increase protein synthesis and the same researchers observed substantial muscle growth. These researchers noticed observable increases in muscle size and function, including increased thickness in the quadriceps muscles and increased running performance.

When compared to the control group, the higher the dose of Apigenin, the greater the increase in muscle mass. It is also important to note that these increases in muscle size came without increases in total body weight or subcutaneous fat gain.

In addition to increased protein synthesis, researchers noted that these muscle gains were due to enhanced myogenic differentiation, increases in the nucleus ratio in muscle fibers (myotubes), and increased phosphorylation of p38 MAPK. This is significant because p38 MAPK is a major regulator or skeletal muscle development.

In studies on mice, after 7 weeks of Apigenin supplementation, researchers let mice run to exhaustion on a treadmill. The ones that had received Apigenin performed better than the ones in the control group. Rodent studies don’t always correlate directly to humans but real world feedback on Apigenin supports the theory that Apigenin may significantly improve stamina and athletic performance in many individuals.

Apigenin has a lot of potential as an anti-aging & longevity supplement for a variety of reasons, many of which are discussed above or below in this write up and range from its potential overall anti-cancer benefits to its cardiovascular, cardioprotective, and neuroprotective benefits, and more.

In addition to the ones listed above, Apigenin has the potential to be a potent anti-catabolic (muscle preserving) supplement to help fight the muscle wasting effects of aging.

The importance of maintaining strength and muscle mass is often overlooked in the scope of most anti-aging supplements, but it can be extremely important for a wide variety of reasons including supporting immune system health, injury prevention, improved mobility & stability, improved self-esteem, and more.

The mTOR pathway is the pathway in the body that drives muscle protein synthesis. It can be activated by a number of means including by amino acids (leucine), insulin, and various growth factors.

Apigenin has been reported to significantly increase muscle protein synthesis via increased phosphorylation of several key components in the mTOR pathway, including Akt, S6K1, and 4E-BP1.

As mentioned above, there are a number of growth factors capable of stimulating mTOR in the body. Insulin-like growth factor (IGF) is one of these growth factors. Both subtypes of IGF, both IGF-1 and IGF-2, contribute to regulating skeletal muscle development and regeneration (building muscle).

Apigenin has been researched for its anti-aromatase and estrogen-modulating properties; including being studied for its effects on aromatase mRNA gene expression.

Aromatase is the enzyme that catalyzes the conversion of testosterone to estradiol (an estrogen). By supporting the reduction of both aromatase and 17β-hydroxysteroid dehydrogenase (17β-HSD), Apigenin may also support an increase in natural testosterone levels.

Apigenin’s unique ability to inhibit 17β-HSD is very rare and is something that has only been accomplished naturally with very few other flavonoids.

Cortisol is the body’s primary stress hormone released when we encounter threatening and stressful situations. While some cortisol is necessary and even beneficial, chronically elevated levels of cortisol can lead to significant reductions in testosterone, loss of muscle tissue, and fat storage.

As a result, high doses of Apigenin have been noted to lower cortisol levels as well as offer potential mood support benefits.

Apigenin and the Elderly:

Apigenin can have many positive benefits for elderly individuals, including many of the different ones discussed in this writeup. These include Apigenin’s potential prostate, blood pressure, cardiovascular, positive mood, & anti-aging benefits, and more.

In addition to those, an important thing for the elderly that often gets overlooked is the chance for a better quality of life by helping to prevent the loss of muscle tissue as each % of loss can reflect negatively on one’s health and also on their self-esteem.

Apigenin has been clinically studied and shown to have promising potential to help support prostate health. This has led to Apigenin becoming one of the fastest growing ingredients in terms of popularity in this supplement category.

Apigenin may have positive benefits on cardiovascular health by supporting a reduction in blood pressure and inflammation.

Animal models have shown Apigenin to have cardioprotective effects in rats with hear damage and one study found Apigenin to protect rats against heart attacks by reducing edema, cell death, and oxidative stress.

Apigenin has the potential to have a positive benefit on a variety of neurological and mood related issues by supporting improved neuron formation and strengthening connections between brain cells.

*These statements have not been evaluated by the Food and Drug Administration. These products are not intended to diagnose, cure, prevent, or treat any disease.

There are no reviews yet.

Be the first to review “Api-Plex” Cancel reply